THE RING OF THE NIBELUNG (Der Ring des Nibelungen), WWV86

The Ring of the Nibelung, WWV86

Cycle of four German-language epic music dramas.
The four parts that constitute the Ring cycle are, in sequence:

Premiere of the full cycle:

The first performance as a cycle opened the first Bayreuth Festival in 1876, beginning with Das Rheingold on 13 August and ending with Götterdämmerungon 17 August, conducted by Hans Richter.
The Rhinegold (Das Rheingold) had been performed against Richard Wagner’s will (but pressed for an early performance by King Ludwig II of Bavaria) and produced at the Munich Hofoper on 22. september 1869.
So had been The Valkyrie (Die Walküre) which was performed, as a single opera, at the National Theatre Munich on 26 June 1870.

The Gibichungs
GUNTHER, King of the Gibichungs (baritone)
GUTRUNE, his sister (soprano)
HAGEN, their half-brother, and Alberich’s son (bass)

The Voice of a Woodbird (soprano)

The Ring of the Nibelung (Der Ring des Nibelungen) is a cycle of four operas with, successively, The Rhinegold (Das Rheingold, WWV86a), The Valkyrie (Die Walküre, WWV86b), Siegfried (WWV86c) and Twilight of the Gods (Götterdämmerung, WWV86d) created by Richard Wagner. 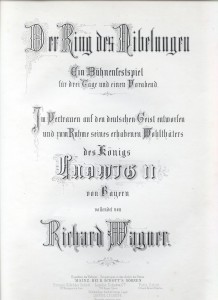 Composed over nearly 30 years of the composer’s life – that is between 1848 and 1876 – this gigantic work was intended to be performed on the stage of the Bayreuth Festival Theatre, built according to the composer’s wishes in optimal execution and staging conditions. Interrupted multiple times during both the writing of his libretto and the music composition, redesigned as many times, Wagner’s titanic work (nearly sixteen hours of music in total) took to its pinnacle the concept of Gesamtkunstwerk (Total work of Art) that the revolutionnary artist presented and defended throughout his career as a composer and playwright, especially in his essays (Opera and Drama and The Artwork of the Future).

The musical world had lost, since the Baroque period, the habit of drawing inspiration from the mythological resources (the Greek and Roman ones generally) in favour of historical contexts conducive to the development on stage of the splendour of the great romantic opera with strong choruses, marches, parades and more or less truthful evocations of characters who actually existed.

But in order to give a symbolic and timeless dimension to what he considered, since its draft, as his “Great Work“, Richard Wagner, then exiled to Zurich after being banished from the Germanic Confederation, composed the poetic text in verse of his titanic project using characters emanating from the Legend of the Nibelungen. (read more…)