THE MASTER-SINGERS OF NUREMBERG, WWV96 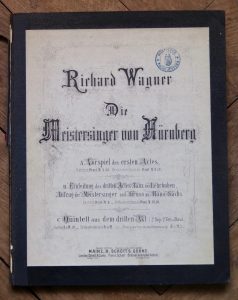 The Master-Singers of Nuremberg (Die Meistersinger von Nürnberg, WWV96) is the eighth of Richard Wagner’s operas and the only “comedy in music” of the composer.

Created after the very pessimistic Tristan and Isolde, The Master-Singers resolutely display a much lighter, even burlesque tone sometimes, rather unusual in the traditional Wagnerian repertoire. It is also the only opera by Wagner that fits faithfully in a historical setting: that of Nuremberg in the middle of the XVIth century. The work shows a central figure having really existed, the shoemaker and poet Hans Sachs (1494-1576), a character sometimes serious, sometimes sarcastic, but always full of kindness, for whom Wagner composed two monologues that are among the most beautiful pages written for a bass-baritone.

Since its creation, the opera has been one of the most resounding successes in the composer’s lifetime. As it is full of exhortations to the popular hymn, the Third Reich did not hesitate to appropriate this work later, which can easily be understood as a cult to German art, distorting the original message – from a European context of nationalist awakenings- into pro-German propaganda.

Although Richard Wagner did not really concern himself with the writing of the libretto until 1861, the composer had already taken an interest in the story of Hans Sachs and the fraternity of The Master-Singers as well as the strict rules regarding the poetic writing (those of the Tabulatur) of which they were the guarantors, particularly during his summer stay in Marienbad in July 1845. But it was after the debacle of the production of Tannhäuserin March 1861 at the Paris Opera, when he was in disarray and tried to haveTristan and Isolde staged, that Wagner got on with a less bleak task than the previous one, renewing with the tradition of The Master-Singers whom he had already approached for the subject of his Tannhäuser.

“I understood Hans Sachs as the last incarnation of the artistically creative spirit,” wrote Wagner immediately after his discovery of the character considered in his time as the most gifted and famous of The Master-Singers. 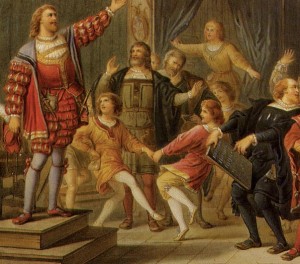 If he was fascinated by the famous poet, Wagner also drew from his personal memories to build (over fifteen years) the dramaturgical framework of his work: thus it is a street scene that he witnessed in Nuremberg in 1835 which inspired him with the finale of the second act; the sounds made by an ironworker served as inspiration for the formidable grating marks that Beckmesser wrote on the board with each style error of the opera hero, Walther von Stoltzing, during the singing contest.

Some sixteen years had thus passed between the initial draft of the libretto and the definitive version that Wagner ascribed it; sixteen years of dramaturgical writing and constantly evolving musical writing, since, in the meantime, Lohengrin, a great part of The Ring of the Nibelung, but also – and above all –Tristan and Isolde, had been composed.

Writing his libretto in the original framework of the Master-Singers fraternity in the middle of the 16th century in Nuremberg – whose historical names he included in his drama – Wagner exposed in it certain themes that were dear to him: devotion to art, its supremacy over the indignities of mankind, the appearance in a society frozen by tradition of a “revolutionary” hero with novelty, as well as sacrifice and renunciation. But it is above all a comedy, not a drama, and Wagner did not hesitate to introduce some comic characters and situations or even their caricature, such as Beckmesser: it was possible to identify in this character Eduard Hanslick, a famous Viennese critic who, on many occasions, had raised concerns about the composer’s work, and thus found himself made a caricature. 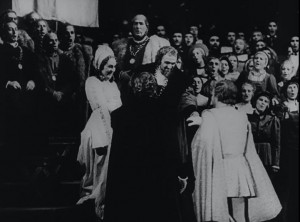 If this work can seem shocking today (notably by the distorted meaning given to it by Hitler’s Third Reich), the glorification of Germanic art as it is expressed especially by Hans Sachs at the end of the opera only reflects the strong nationalist sentiment as it was widespread in Europe on the eve of the war of 1870; it is by no means synonymous with Pan-Germanism as it was defined in the XXth century.

Often borrowing in his musical writing contrapuntal art, that of the fugue (or fugato) magnified by Bach (in the prelude or in the final scene of Act II), or that of the religious chorale (particularly that of the first scene of the opera), Wagner did not hesitate – as Richard Strauss later did in his Knight of the Rose – to mix with his own musical language past musical forms to perfect the atmosphere of his work.

However, the production did not happen without clashes. In 1865 Richard Wagner, then under the protection of King Ludwig II of Bavaria, had once again curried favour with the public thanks to Tristan and Isolde(created in Munich on 10 June, 1865). But his demands on the Crown (the construction of a theatre that would be especially dedicated to his work, annuities from the casket of the kingdom when it was not the sovereign’s himself), and his lifestyle (he publicly displayed in Munich a flashy luxury and a guilty relationship with Cosima, his friend Hans von Bülow’s wife) earned him the enmity of the Bavarian population.

The King of Bavaria was reluctantly obliged to pronounce the disgrace of Wagner, who once again chose Switzerland as a land of exile, and more precisely Tribschen, on the shores of Lake Lucerne. But even as he was far from the Munich cultural and musical scene, Wagner could always count on the support of his royal patron. 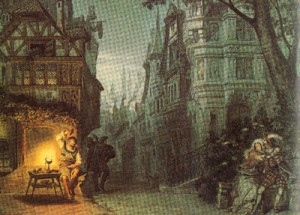 This is how was decided the production of The Master-Singerson the stage of the Royal Theatre of Bavaria in 1868. Although Wagner, who was driven away by the exile to which he was obliged, could only follow the preparations for the staging of the work from his retreat in Tribschen (he only attended the final rehearsals from the end of May), he was naturally present in the royal box and alongside Ludwig II of Bavaria for the production of the opera which took place 21 June, 1868 under the musical direction of Hans von Bülow. The work was an immediate success.

Considered as one of the leading works of the German repertoire, The Master-Singers of Nuremberg was among the first ones to enter the repertoire of the Bayreuth Festival (after The Ring of the Nibelung, Parsifal and Tristan and Isolde) in 1888.