The action takes place in Antwerp, on the River Scheldt, at the 10th century 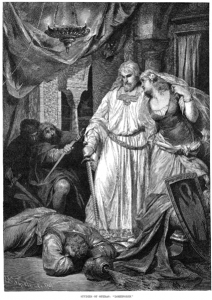 The final scene of Lohengrin

Lohengrin (WWV 75) is the sixth of Richard Wagner’s operas and the third of the composer’s operas created during his “mature” phase. Composed between 1845 and 1848, Lohengrin is consistent with the operas composed for the Opera of the Royal Court of Saxony where Wagner, who then assumed the position of choirmaster, had finally reached the status of “respectable” composer after the resounding success of the production of Rienzi, the last of the Tribunes (20 October, 1842), and the mixed success of The Flying Dutchman (Der Fliegende Holländer) (2 January, 1843) and Tannhäuser (19 October, 1845).

It was during his Parisian stay from 1839 to 1842 and when he discovered the ancient Germanic legends that gave him material to compose his Tannhäuser that Wagner also got acquainted with the legend of the Knight of the Swan. The essential inspiration for the composer came from Wolfram von Eschenbach’s Parzival (a 13th century poem that associates the chanson de geste from the Epic of The Holy Grail to the Knight of the Swan) as well as the German legends that the Grimm brothers had published between 1816 and 1818. In the different versions of the legend related to the character of Lohengrin are preponderant the theme of the Knight’s mysterious origins, the prohibition against him revealing his name as well as the pain that his love feels for not being able to ask the fateful question (read more…)