Rienzi, The Last of the Tribunes, WWV49

Libretto and music by Richard Wagner,
after Edward Bulwer-Lytton’s novel Rienzi, the Last of the Roman Tribunes (1835)

The action takes place in Rome, in the middle of the 14th century.

Rienzi, der letzte der Tribunen, WWV49 (Rienzi, the Last of the Tribunes) is Wagner’s third completed opera and what is generally considered as the last of his youth operas. The subject is based on the story of Cola di Rienzo, more precisely on the historical novel by Edward Bulwer-Lytton, and takes place in medieval Rome. 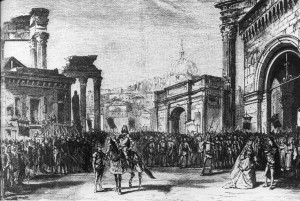 Composed between April 1839 and October 1840, Rienzi was first brought to the stage in Dresden on 20 October, 1842, almost at the same time as The Flying Dutchman. While the former was a triumph, the latter, undoubtedly ordered in a hurry by the authorities of the Court of the Saxon Kingdom after the immense success of Rienzi, was not met with the same enthusiasm from the public or the critics.

After dabbling in the German romantic style (The Fairies), then the Italian one (The Ban on Love), Wagner wanted to conquer Paris. He thus created a work along the same lines as the “grand opera à la française” with the will – already – to surpass it: a historical subject developed in five acts with a ballet in the third, large scenes allowing the deployment of vast choral parts, grandiose decorations animated by machineries with spectacular effects and no less than twelve soloists! But the work originally created for Paris, and thus conceived on a libretto in French – nicknamed furthermore by Hans von Bülowas the best opera in… Meyerbeer! – took a quarter of a century to reach the capital.

The true story of Nicola Lorenzo, known as Cola di Rienzo (1313-1354), started in a heroic way. He rose up against corruption in Rome, and this son of a baker pushed the people to rise up against the dominant clans. He got acclaimed as a new tribune, but his megalomania brought him enemies in high places, and he ended up murdered. Wagner takes up the outlines of Bulwer’s novel, but idealizes the hero (read more…)