TANNHÄUSER AND THE MINSTREL’S CONTEST AT THE WARTBURG, WWV70

Tannhäuser and the Minstrel’s Contest at the Wartburg, WWV70

The action takes place in Eisenach, Germany, in the early 13th century. 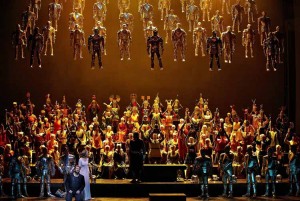 Tannhäuser and the Minstrel’s Contest at the Wartburg (WWV70) is the fifth of Richard Wagner’s operas, namely the second of the composer’s operas created during his “mature” phase. Composed between 1842 and 1845, after the mixed success received by The Flying Dutchman (Der Fliegende Holländer, WWV 63), Tannhäuser was conceived to be presented at the Opera of the Royal Court of Saxony where Wagner then performed the duties of choirmaster.
The idea was born when he was in Paris, while he unsuccessfully tried to convince the direction of the Paris Opera to agree to stage Rienzi, and then The Flying Dutchman.
Indeed, he had been offered by his philologist friend Samuel Lehrs, also in exile in Paris, a number of collections gathering various popular legends inherited from ancient times, this brilliant intellectual who graduated from the University of Königsberg knowing the composer’s tastes in terms of history and legends. (read more : Tannhäuser and the Minstrel’s Contest at the Wartburg in short, clik here)