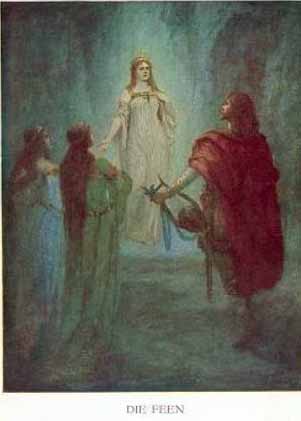 Wagner, Die Feen (The Fairies), Grand romantic opera in three acts (produced for the first time in 1888 in Munich)

The Fairies, the first opera entirely composed and completed in Wagner’s hand, will never be performed on stage during the composer’s lifetime, despite an attempt that had been planned in Leipzig in 1834. The first will indeed be posthumous on June 29, 1888 in Munich, under the direction of conductor Franz Fischer.

Musically, the work is strongly influenced by the vocal and orchestral writing of Weber and Marschner.

Regarding the libretto and for the first time in Wagner’s work, are gathered together the themes that recur in his poetic and dramatic work: the conflict between a supernatural world (that of fairies) and the world of men, relief and redemption through love.

Wagner had previously attempted to compose music by trying to set to music a libretto by his friend Heinrich Laube, which recounted an episode in the life of Kosciusko, on the themes of independence and insurrection dear to the composer. But this project is aborted, because Wagner has difficulty writing music – as was done at the time – in successive “numbers”, and especially on a text that is not by himself.

Disagreeing with the theories already present in Wagner’s mind on Total Art, Wagner wrote the libretto and composed the music of The Fairies, a work in which already appears the theme of redemptive love. Despite fairly conventional music, there are a few pages in The Fairies that foreshadow Wagner’s innovative genius.