Libretto and music by Richard Wagner

The action takes places In a Middle Ages legend, in Cornwall, England and in Brittany, France 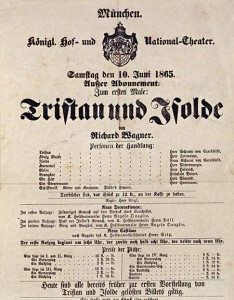 Seventh opera by Richard Wagner, Tristan and Isolde (Tristan und Isolde, WWV 90) is the fourth opera created during the so-called maturity phase of the composer and the first conceived under the patronage of King Ludwig II of Bavaria.

It is also the only work derived from a command in the career of the composer: on 9 March, 1857, Wagner received a visit from Dr. Enesto Ferreiro-França, emissary of Emperor Dom Pedro II of Brazil who asked Wagner to compose “an opera in the Italian style” in order to get it performed in Rio de Janeiro. Seduced by this command and attracted, as always through his works, by the project to magnify on stage the power of love, Wagner temporarily abandoned the composition of The Ring of The Nibelung (at that time, he was working on the composition of the second act of Siegfried) as well as his project of The Master-Singers of Nuremberg (Die Meistersinger von Nürnberg), of which he had already woven the main plot.

The libretto of this “musical drama” in three acts is inspired by a traditional Celtic legend dating from the XIIth century. Wagner dived into the many sources relating it: the two versions of Gottfried von Strassburg (1205-1210), the continuations of Ulrich von Türheim (1235) and Heinrich von Freiberg (1280), Sir Tristem in Middle English according to Thomas von Erceldoune, Béroul’s Tristan (1180), the lai The Honeysuckle by Marie de France … However, he only made the real project of Tristan in 1854, primarily thanks to three triggers: reading Schopenhauer’s The World as Will and Representation, meeting Mathilde Wesendonck, and finally the competition initiated by his friend Karl Ritter, who had also been thinking about writing a drama about Tristan. (read more…)