If Wagner was the cultural and musical chronicler of his time, if he remained a revolutionary activist, he had also gone into the act of police, and if he was finally his master of Bayreuth celebrated as the one of the major artist of his At the time, the illustrious composer did not live before a man made of chair and blood, animated by passions, with a sometimes violent, sometimes facetious, and sometimes tender character.

If the Wesendonck name is linked for any music lover to the famous cycle of melodies inspired in Wagner by his muse Mathilde, it is also linked to the many aids the composer received from Otto, Mathilde’s husband, who in his own way was one of the most fervent defenders and builders of Richard Wagner’s work. Often too simply caricatured and reduced to the figure of a deceived husband who would have been deceived and robbed of both his largesse and his wife, Otto Wesendonck, beyond being a wealthy trader, was actually a brilliant mind. The one who was one of the most important silk merchants in Europe did not hesitate for a moment to offer Wagner his help, becoming one of his patrons, maybe seeking in this way to “buy” a reputation among the intellectuals of his time, but especially acting like the enlightened mind he was.

The Wesendonck family was one of the oldest German trader families: of Dutch descent, its roots date back to the XVth century (the original name of the family then was van der Wesendonk; the spelling without the “ck” ending typical of German orthography is often found in the important correspondence between Wagner and him, as well as in his autobiographical writings). Over the centuries, the Wesendonck family became one of Xanten’s most renowned trader, notable, jurist and cleric families; is it by chance that, in The Song of the Nibelungs (the Nibelungenlied), this city is also the homeland the hero Siegfried is originally from?

On 16 March, 1815 Otto Friedrich Wesendonck was born in Elberfeld (now Wuppertal) on the Kipfordstrasse. He was the son of August Jakob Wesendonck (who served as correspondent for a wealthy trader in Elberfeld named Luckemeyer) and Sophia (née Scholten). The couple had five children, including Mathilde, Otto’s sister, and Hugo, his brother, who later had a great career as a lawyer and politician.

As early as 1833, the young Otto, who was not even twenty years old, made his first trip to New York as a sales representative for one of Elberfeld’s wealthy merchants. As soon as he returned to Germany in 1843, Otto Wesendonck created his own business importing and selling silk, a business that became as early as the middle of the XIXth century one of the most important companies in this field in Europe.

On 15 October, 1844, Otto Wesendonck married Mathilde (née Eckhardt), and this was the first marriage; it alas did not last as long as the two spouses had hoped: an illness carried the young Mathilde off shortly after their union, on 8 December of the same year. 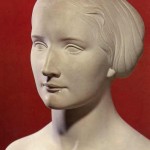 Otto was deeply wounded by the passing of his young wife, but when he met Agnes Luckemeyer during a wedding (her father was no other than his own father’s employer), he fell madly in love. As he could not erase so quickly the memory of his first wife, when he asked Agnes to become his wife, he also asked her to adopt… the first name of the deceased! That is how Agnes became MathildeWesendonck. She was beautiful, young, elegant and distinguished, and thirteen years his junior. The couple formalised their union on 19 May, 1848.

Richard Wagner’s patron… for better or for worse!

In 1851, Otto moved with his wife to Zurich, then the center of the European silk trade, to the famous Hotel Baur au Lac – which was, for that matter, also a meeting place for the European intelligentsia – before considering building a villa there. At that time, the project to settle there was still vague.

As soon as they arrived, the couple met Richard Wagner, then in exile in Zurich. The famous composer of The Flying Dutchman, Tannhäuser and Lohengrin, fleeing his homeland Germany from which he had been “exiled”, was at that time at the helm of the Zurich Theatre. The Wesendoncks met the Master during one of the concerts he was conducting (the concerts included mainly works by Beethoven, whose name and work Wagner wanted to make known across Europe – but also some of his own works including the Overture to Tannhäuser).

Between the artist in disarray, penniless, who had chosen to temporarily swap his composer outfit for the theoretician’s, and the Wesendoncks, the understanding was immediate. Besides, between the artist – who accumulated personal misfortunes, failures (misunderstanding from the public), and financial precariousness – and the generous and rich patron, the agreement seemed ideal! The Wesendoncks became some of Wagner’s most loyal supporters as soon as he revealed to the Zurich public of the Baur au Lac Hotel the four poems from The Ring during four evenings (16 to 19 February, 1853). Enthusiastic about the revolutionary idea of a colossal work built for a theatre that Wagner already imagined as unique, Wesendonck went so far as to buy the rights to The Ring(in 1858). The patron would hardly realize a return on the investment he made on this occasion.

While the Wesendoncks continued their project for a more comfortable move to Zurich by building a sumptuous neoclassical villa on the high ground of the city (in the district of Enge, in the center of the Rieterpark), the Wagners – Richard and his wife Minna who had come to join her husband – multiplied the provisional accommodations. Over the years, as Otto’s “patronage” became increasingly concrete (the rich merchant multiplied the financial aids to the artist), the relationship between the Wesendoncks and Richard Wagner became increasingly close. Also, when the sumptuous building, provided with one of the most complete and erudite libraries of its time, was finished on the “Green Hill” and ready to be moved into on 22 August, 1857, the rich patron proposed to the Wagners to settle in the replica of a chalet, “The Asylum“, located at the back of their property. A godsend for Wagner to be physically close to his patron. Especially since the villa of the Wesendoncks quickly became the place to be in in Zurich: many parties occurred that welcomed the most brilliant artists and guests around the beautiful Mathilde, then a hostess fully enjoying her means.

But every rose has its thorn. Wagner’s artistic aspirations went beyond the man’s reason. The story is famous: when Wagner sought inspiration for his Tristan and Isolde, it was in the figure of the beautiful Mathilde that he dreamed the Princess of Ireland. What better than a hopeless love to compose this exuberant “Ode to the night” that is Tristan, to get mixed up with the Tristan character, to break the rules, to defy the authority of King Marke (the scorned husband in the celtic drama)… in other words, Otto Wesendonck. The composer multiplied the poetic and musical homages to his Muse (the first act of The Valkyrie, Wesendonck Lieder and naturally Tristan and Isolde) and the impassioned letters to his inspiration. The two protagonists, Richard and Mathilde, undoubtedly mixed dream and reality in the narrowness of the “Green Hill” that truly was no longer enough to contain so much ardour. That is how the drama broke out: Minna intercepted one of the many missives. After talking it over with the one that inspired the drama (Mathilde, the wife found “guilty”), the Wagners decided to leave hastily the quiet of the “Asylum“.

Was the unlucky Otto aware of such a situation, provided there had been a proven physical relationship? The nobility of King Marke would have nothing to envy to Otto Wesendonck’s who preferred to see the incident ending there and his protégé leaving to finish his Tristan in Venice.

For all that, Richard Wagner was always grateful to Wesendonck for the help he gave him during his years of distress. At the height of his misfortune (the episode of the Tannhäuser scandal in 1860-61 and the years of wanderings that followed, notably in Vienna, in Russia and until the new “rehabilitation” of the latter with the appearance in his life of King Ludwig II of Bavaria… as well as his new protectorate), Wagner multiplied the demands for financial help (the correspondence between the two men is incidentally the fullest at the darkest time of the composer’s life). Wesendonck – who had not forgotten the drama that happened on the “Green Hill” –  knew however how to overcome the torments of his own ego and meet the needs of the one who, still, remained his friend forever.

Reaching the height of his glory during the premiere of the Master-Singers at the Munich Opera, Wagner was able to pay the most vibrant homage that an artist could honor his patron with. A few days before the premiere of the opera, the composer sent the piano score of his opera to Otto Wesendonck with the following dedication: “To his dear friends from the Green Hill and with his memory full of thanks – Richard Wagner, May 1868. “

If Wesendonck was present for the creation of the work (21 and 28 June, 1868, at the National Theatre in Munich) of a Wagner now in the spotlight, the beautiful Mathilde, as for her, was absent from the performances.

At the end of a Civil War that had raged in the United States and had guaranteed Otto Wesendonck a more than ample material comfort, the businessman withdrew from business to see through his life as a free man and patron as he wanted it. In 1872, the couple resold the villa on the Green Hill (which later became the Rietberg Museum as it is known today) and moved to Dresden. Return to Germany. From afar, Wesendonck kept up with the epic that Wagner, now with Cosima, was undertaking in Bayreuth. After all, Otto Wesendonck remained the owner of rights to The Ring! Certainly, Wagner – a moment of frivolity? one could say that…! – also had in the meantime yielded these rights to his other patron, King Ludwig II of Bavaria. But was it that important for the work of art of the future to see the light of day?

The couple, this time fully reunited, attended the premiere of The Ring in Bayreuth in the summer of 1876. Certainly… Wagner owed them that!

Otto Wesendonck subsequently acquired the “Traunblick” villa along Lake Traunsee in the Salzkammergut region in Austria, a new haven of peace that, without exactly replacing the villa “On the green Hill” on the high ground of Zurich, knew how to satisfy their new hosts with the tranquility peculiar to the region of Austrian lakes. In autumn 1882, Otto Wesendonck, who was almost seventy years old, moved with his wife to Berlin, where he died in 1896.

The beautiful Mathilde survived him by six years before joining him. 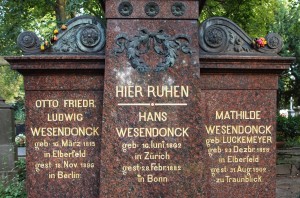