The Rhinegold (Das Rheingold), WWV 86A, is the first of the four music dramas that constitute Richard Wagner’s Der Ring des Nibelungen, (The Ring of the Nibelung). It was performed, as a single opera, at the National Theatre Munich on 22 September 1869, and received its first performance as part of the Ring cycle at the Bayreuth Festspielhaus, on 13 August 1876.

Wagner wrote the Ring librettos in reverse order, so that Das Rheingold was the last of the texts to be written; it was, however, the first to be set to music. The score was completed in 1854, but Wagner was unwilling to sanction its performance until the whole cycle was complete; he worked intermittently on this music until 1874. The Munich premiere of Das Rheingold was staged, much against Wagner’s wishes, on the orders of his patron, King Ludwig II of Bavaria. Following its 1876 Bayreuth premiere, the Ring cycle was introduced into the worldwide repertory, with performances in all the main opera houses, in which it has remained a regular and popular fixture.

In his 1851 essay Opera and Drama, Wagner had set out new principles as to how music dramas should be constructed, under which the conventional forms of opera (arias, ensembles, choruses) were rejected. Rather than providing word-settings, the music would interpret the text emotionally, reflecting the feelings and moods behind the work, by using a system of recurring leitmotifs to represent people, ideas and situations. Das Rheingold was Wagner’s first work that adopted these principles, and his most rigid adherence to them, despite a few deviations – the Rhinemaidens frequently sing in ensemble. 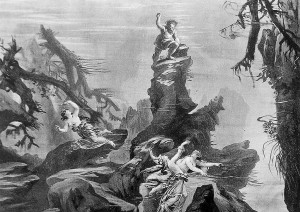 As the “preliminary evening” within the cycle, Das Rheingold gives the background to the events that drive the main dramas of the cycle. It recounts Alberich’s theft of the Rhine gold after his renunciation of love; his fashioning of the all-powerful ring from the gold and his enslavement of the Nibelungs; Wotan’s seizure of the gold and the ring, to pay his debt to the giants who have built his fortress Valhalla; Alberich’s curse on the ring and its possessors; Erda’s warning to Wotan to forsake the ring; the early manifestation of the curse’s power after Wotan yields the ring to the giants; and the gods’ uneasy entry into Valhalla, under the shadow of their impending doom.

Having completed his opera Lohengrin in April 1848, Richard Wagner chose as his next subject Siegfried, the legendary hero of Germanic myth. In October of that year he prepared a prose outline for Siegfried’s Death, which during the following months he developed into a full libretto. After his flight from Dresden and relocation in Switzerland, he continued to develop and expand his Siegfried project, having decided meantime that a single work would not suffice for his purposes; in his enlarged concept, Siegfried’s Death would be the culmination of a series of musical dramas incorporating a network of myths from his sources and imagination, each telling a stage of the story. In 1851 he outlined his purpose in his essay “A Communication to My Friends”: “I propose to produce my myth in three complete dramas, preceded by a lengthy Prelude (Vorspiel)”.[3] Each of these dramas would, he said, constitute an independent whole, but would not be performed separately. “At a specially-appointed Festival, I propose, some future time, to produce those three Dramas with their Prelude, in the course of three days and a fore-evening”.

In accordance with this scheme Siegfried’s Death, much revised from its original form, eventually became Götterdämmerung (The Twilight of the Gods). It was preceded by the story of Siegfried’s youth, Young Siegfried, later renamed Siegfried, itself preceded by Die Walküre (The Valkyrie). Finally, to these three works Wagner added a prologue which he named Das Rheingold.

For further information : THE RING OF THE NIBELUNG (Der Ring des Nibelungen) in short