Wagner, the first European composer! If the name of the composer sounds more German than the noun “Germany”, the artist, himself always in search of notoriety and success that he could not find within the borders of the German Empire, exiled in his younger years to find recognition… elsewhere. And these new horizons, Wagner would seek them from London to Saint Petersburg, passing by Paris, Venice or Zurich, places that were as much living places as places of musical creation and artistic inspiration.

On August 21, 1837, Richard Wagner landed alone in Riga, with the prospect of occupying the post of conductor at the town theatre. Before leaving Berlin and in a desperate attempt to bring Minna back to the marital home (the couple had gone through many “crises” during their first years together), the composer wrote to his wife: “Riga has been described to me as the most beautiful place in the world, especially when it comes to making money.” (Letter to Minna Planer)

Were these material arguments what led Minna to put an end to the relationship she had with “Dietrich” in Dresden? In a letter full of regrets, Minna asked her husband for forgiveness and then joined him – along with her sister Amelie – on 19 October, 1837.

The composer’s first impression on the city and the theatre, as well as on its organization, was very positive: “after the unfortunate experiences I had with the small German stages, I was at first pleasantly impressed with the organization of the new Riga Theatre. Quite a few wealthy amateurs and wealthy merchants had founded a company that subsidized its management. “ (Mein Leben) 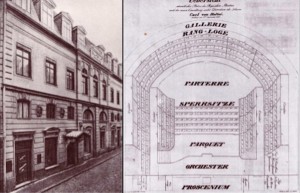 Three elements in the layout of this recently reconstructed theatre deeply marked Wagner, three elements that he would remember for the plans of the future Festspielhaus in Bayreuth: an auditorium set in the shape of an amphitheatre allowing equal visibility from wherever one is seated; this same auditorium can be plunged into near darkness (the ancestor of our modern movie theatres); as well as a (small) orchestra pit extending – due to a lack of space – under the stage (this is how the pits of opera theatres were conceived starting from the 19th century).

Riga, a model for Bayreuth? In the organization of the room no doubt, or at least its early stages, but certainly not in the capacities to receive the public and especially the narrowness of the stage which did not allow the management to consider productions “of spectacular proportions“: “the Riga theatre developed in a very modest space; the stage was so tiny that there could hardly be any way of displaying some great pomp on it. “(Mein Leben)

Wagner’s beginnings were modest; he stayed in a cold and cramped apartment in the center of the city located in Kaleju iela: “We passed again the icy cold beginning of 1838 in a cramped and uncomfortable apartment of the old town” (Mein Leben). The couple finally moved in the spring of 1838 in a more comfortable home, a wooden house in the suburbs of Petersburg, on the Bulvaris Aleksandra alley. 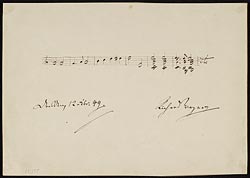 In two years, Richard Wagner directed and sometimes staged with the means allocated to him about twenty productions of French, Italian and German operas including five creations of his. And with the time that he had between two performances, he composed the libretto and the draft music of Rienzi. But the work was disproportionate and Wagner knew from the get-go that the technical means offered by Riga would not allow him to perform it in loco. He intended it for stages offering more important capacities: “I took pleasure now in planning for Rienzi a rich staging work that inevitably forced me to leave the narrow theatres I had been accustomed to up to now and to seek broad horizons. “(Mein Leben).

Despite the work of the conductor, Wagner’s fiery and ambitious temperament did not appeal to the theatre authorities. He realized rather quickly the discrepancy between his own artistic ambitions and local expectations. “Riga is described to me as the most beautiful place in the world, especially when it comes to making money …”, wrote the famous German composer and opera reformer Richard Wagner to his wife, Minna, shortly before he left Berlin for Riga, which was at the time a provincial capital of the Russian Empire. But, due to unpaid bills and a legal action against him, Wagner stayed in Riga only two years, from 1837 to 1839. From an artistic point of view, two successful years, to the point where the Latvians nicknamed their capital “Wagner’s city“.

In the footsteps of Richard Wagner in Riga today 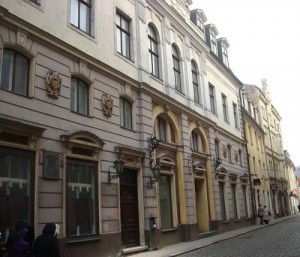 The theatre located on Ķēniņa Lielā iela, now known as Vagnera iela in the Old Riga is currently closed to the public; the facade of the theatre that can still be seen is original, but the interior of the room has been significantly modified since Wagner’s time. Only one room in the building retains its original appearance.

The apartment in Kaleju iela was destroyed in an air raid during the Second World War, and the wooden house on Bulvaris Aleksandra (now Brīvības iela 33) in the suburbs of Petersburg was demolished in 1911. In all, very few vestiges of the composer’s passage in Riga remain. Although the house of Bulvaris was replaced as soon as it was demolished by a black-brick building, if you have the opportunity to go to Riga, do not hesitate to take a look through its main door: a stained-glass window dating from 1913 and representing the composer with his famous beret commemorates the passage of its illustrious host.